In a post to the DHS’s blog, U.S. Homeland Security Secretary Michael Chertoff charged the media for overlooking “a very significant story that tells us a lot about why we need some of the moderately inconvenient security measures with which we live” — a reference to the limit on liquids allowed on board flights, and other airport security requirements.

Chertoff hinted on some chilling plot details unreported to media (because U.K. law bans public discussion of the cases under investigation).

If the terrorists had succeeded to bring liquid explosives on seven or eight aircrafts flying to New York, Toronto, Washington, Montreal, San Francisco and Chicago, there could have been loss of thousands of lives and devastating effect for aviation market and global economy. The key component of the bombs the terrorists were intended to use was a liquid hydrogen peroxide explosive carried in half-liter bottles of soft drinks. The hydrogen peroxide is a component that can be purchased in any drugstore. The devices would have been carried in hand luggage, along with detonators made from batteries and disposable cameras. 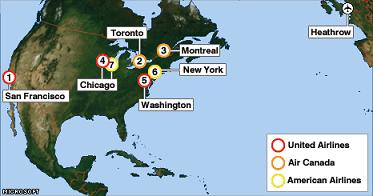 The entire story of banning liquids on board flights demonstrates weakness of the event-based decision making of the Homeland Security agencies. The issue of liquids on board flights has been raised long before the U.K. plot exposed this particular security vulnerability. How long should it take for the govenments to accept pre-emptive risk assessment of security vulnerabilities instead of post-attack over-reactive action? Terror innovates and takes new shapes, so should we.