The National Applications Office is a new DHS body, clearing access of law enforcement, border security, Coast Guard and other agencies to satellite feeds. This move, while generating wide discussions over privacy issues and legal implications, may also have a profound impact on the market for commercial satellite imagery.

Currently access to satellite feeds is mostly in the domains of DOD and Intelligence Community. On the DOD side, Strategic Command coordinates all military and civilian space assets while Air Force Space Command acquires and operates the majority of military satellites. The National Reconnaissance Office (NRO) operates the nation’s intelligence satellites, often known as national technical means (NTM).

The two main advantages of commercial imagery are the lack of legal restrictions on their use over the United States and its unclassified nature. Privately owned commercial systems do not face the same restrictions as national systems. Their unclassified products can easily be distributed to anyone, provided the proper licenses are bought. This is important because many homeland-security agencies, especially at state and local levels, do not have the necessary security clearances for national imagery. Also, the dissemination of these products can be done through the Internet, thus providing quick and easy access. The commercial satellite technology can map the border, ports and airports; potentially detect a tunnel under the border by seeing earth disturbances or unusual vegetation patterns and help the Coast Guard to zero in on a ship’s location. Because of these advantages, commercial imagery, as it becomes more available, can become a major source of data from space for homeland security. The picture below is high resolution image of the auxiliary terminal at the King Khaled International Airport, Ryad, Saudi Arabia (source: DigitalGlobe, Google Maps). 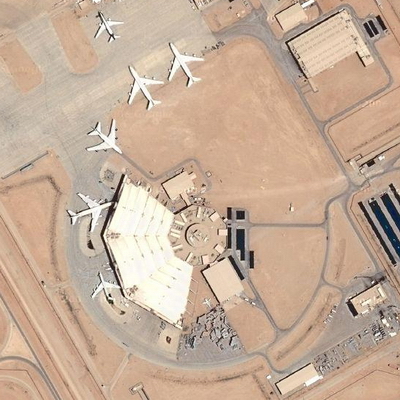 The following three commercial satellite companies are wll poised to benefit from new developments around a newly established the National Applications Office:

A commercial satellite owned by Space Imaging (acquired by GeoEye) took some of the most widely recognized pictures of the 9/11 attack. The New York governor’s office contacted Space Imaging directly to request information on the use of satellite imagery for disaster assessment and emergency management. It set a precedent where a state went directly to a private company rather than a federal agency for help on using space assets.