On January 25, 2017, President Trump signed an executive order (see Appendix A) that calls for the construction of a wall along the U.S. southern border to prevent illegal immigration from Mexico.

During the election campaign, Trump quantified that the cost of the wall will hover at $8-12 billion. However, politicians and engineers challenged that figure as entirely unrealistic, not even covering the minimum predictable costs.

According to a paper published in MIT Technology Review, a 1,640 km steel-reinforced concrete wall should cost $40 billion. According to the wall expert Mr. Todd Sternfeld, the cost of the wall could exceed $26 billion. The Bernstein Research group has estimated that the cost the new wall could be between $15 and $25 billion.

In 2009, the CRS (Congressional Research Service) concluded that the cost of ownership of a 1,610 km double-layer fencing ranges from $16.3 to $69.5 billion over a period of 25 years, depending on the wall-fence specifications. 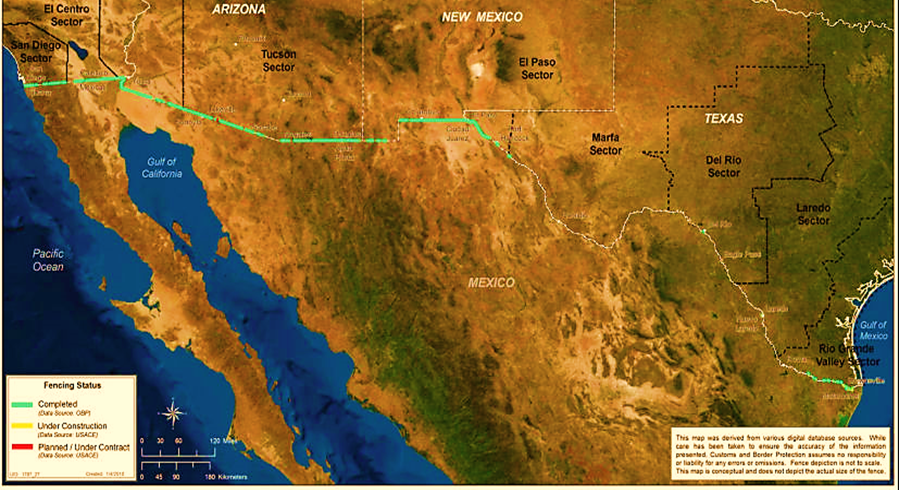 On February 9, 2017 Reuters (Ms. Julia E. Ainsley) published some details concerning a preliminary DHS internal document to be submitted to the White House Office of Management and Budget (OMB), which prepare President Trump’s 2018 Federal Budget Request to congress. The document states that:

” President Donald Trump’s ” wall” along the U.S.-Mexico border would be a series of fences and walls that would cost as much as $21.6 billion, and take more than three years to construct. With 1,046 km of the border already fortified, the new construction would extend almost the length of the entire border. The plan lays out what it would take to seal the border in three phases of construction of fences and walls covering just over 2,000 km by the end of 2020″ .

The purpose of this analysis is to make the public aware of the conflicting cost estimates, by using the expertise of Homeland Security Research Corp. (HSRC) engineers gained from past border wall-fence consulting projects.

As the cost of the Wall ” is in the details” (e.g., design specifications), HSRC engineers analyzed 4 wall-barrier design alternatives, ranging between:

To download the complete report please provide your details