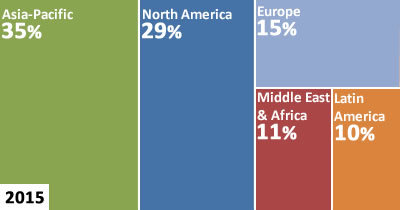 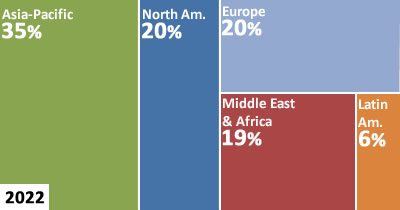 The past 3 years have seen explosive-based terror account for 56% of over 36,000 worldwide terror attacks. The widespread use of improvised explosives drive security agencies and private sector critical infrastructure security managers to increase their spending on explosives trace detection (ETD) devices. According to the report it will .create a solid 2016-2022 CAGR of 6%.

The 2015-2016 ISIS-inspired and other terror groups bombings .and attacks across Europe, the Middle East and Africa will drive governments to rise funding for overhauling their counter terror explosives screening checkpoints.

According to Homeland Security Research Corp. (HSRC) new report, Explosives Trace Detection Technologies & Global Market ““ 2017 – 2022, the explosives trace detection technologies & global market will grow at a 2015-2022 CAGR of 6%. An increased demand for explosive trace detection technologies and weapons detection products had already commenced after the November 2015 carnage in Paris. The growing number of vehicle-borne explosive and other IED attacks across the Middle East and Africa in 2014-2016 have emphasized the growing need of security decision-makers to increase their capabilities in the explosive screening sphere.

A major on-going challenge is the detection of homemade improvised explosives like TATP (used by the Paris and Brussels bombers) HMTD. TATP & HMTD are attractive as a terror weapon because they are relatively easy to prepare and, until recently, could not be detected by standard explosives screening methods. TATP and HMTD precursors can be easily found in hardware stores or beauty salons (e.g., nail polish removers). Furthermore, improvised explosives like hydrogen peroxide, acetone, and mineral acid can be purchased in large quantities.

The market is set to undergo a transformation from 2016-2022 through the following drivers:

The Explosives Trace Detection (ETD): Technologies & Global Market report, segmented into 43 submarkets offers for each submarket 2015-2016 data and assessments, and 2017-2022 forecast and analysis. In 610 pages, 130 tables and 135 figures, the report analyzes and projects the market and technologies from several perspectives, including:

Other reports revolving around Explosives Trace Detection (ETD) technologies and markets include: